This Farmin’ Thing Is HAAARRRDDD

Yesterday, our little Mo, the goat that is still pregnant got very amorous with Mr. Shady and me.  She wanted to lick our arms and kiss us and chat us up and touch her belly.  She doesn’t usually like that sort of attention.  I knew something was eminent.    I drove into town to do errands and received a call from Mr. Shady relating that Mo’s water had broken and she was in labor.  Oh boy.  I was SO excited given the fact I had missed the  only one we have had thus far. 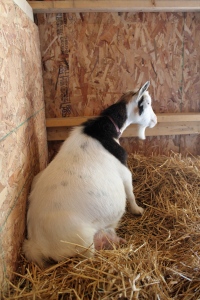 Does she look comfortable to you?

When I got home, she had been laboring for about an hour and was glad that I was there.  She wanted me very close which I was happy to oblige.  Mind you, I have never done this sort of thing.  While I have read a lot about goat delivery,  I could not have predicted or known how to handle what was to come.

After a couple of hours, Pops and I began to wonder if perhaps there could be a problem.  I am so glad he was there.  Mr. Shady was there too.  Can not tell you what a blessing that was.  I had set up shop in the stall with all my technologies.  Ipad, phone, camera, magazines.   I decided to look up how long she should be doing this labor,  pushing thing.  She should have been delivering by now and since she wasn’t would indicate problems.  Problems?  What in the world could I or WE do about her problem.  Oh,  God, please help us.   She was exhausted and wasn’t pushing anymore.

I had to go in.  Yes, go in.  I went in and the baby was breach.  I had to turn it.  Yes,  turn it.  At one point I was in almost to my elbow.  Like I said, this farmin’ thing is HAAARRRDD.  I actually got it turned around and a beautiful little girl named June was born.  I was praying for two girls.  The miracle of life.  It DOES NOT get better than this. 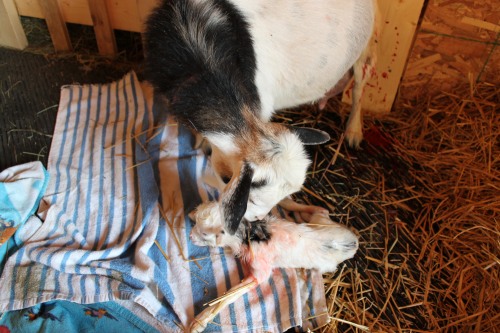 I felt inside and realized another was coming.  Yeah!  and it appeared to me that it was in the “diving” position.  Feet first with head coming immediately  after.  But what in the world do I know.   She slid right out.  Another girl!  Ruthie.   Okay.  lets all breathe and take a break before looking to see if there is another.   The stress level was high and I wasn’t  sure I wanted to do this again.  I was scared that I would not be able to right a wrong thing again.  It was a total fluke that I was able to right the first one.

I reached in and there was yet another one.  Poor Mo.  No wonder she was SO huge.  I could not get a handle on what this thing was doing.  Only one leg came out.  I tried to get the other facing outward and all went wrong from there.  Oh my goodness.  She couldn’t push.  The baby wouldn’t come.  She became very dry.  And it was stuck.  Mr. Shady and Pops had to go to great measures to save Mama.  It was a tragic scene.   We, of course, lost the baby.   Mama seems to be doing ok so far.   And I still feel like throwing up.   We buried the baby not having found out the sex.

It is just a goat.  I know.  But none the less,  I cant help feeling  a little inadequate and that maybe had we done things differently there may have been another outcome.  What if we had allowed her to do it all herself.  Would she had been able to figure it all out?  Or would she and the babies have died?  We will never know.

We have two beautiful girls.  June and Ruthie.  A mom that is doing well.  I think. She is alive.  God is so good.  The blessings multiply daily.

This is/was really hard for me.  Tons more hard for Mo.   I only have a few bumps and bruises.  Hers run much deeper.  She lost a child.   As for Pops and Mr. Shady, they are men.  They don’t share unless you ask,  but I imagine it cut them a little deep too.

A crazy day at the farm.

8 responses to “This Farmin’ Thing Is HAAARRRDDD”