When we entered the barn early, early in the morning I felt like I was a character in  Charlotte’s Web.   They (the goats, chickens, guineas and turkey) were quiet and tucked in.  Their eyebrows  raised with curiosity.  “What are the people doing here this early?  Is something the matter?  Are they coming to take us away?  Who are they going to take?  Where would they take us?  It is still dark outside.”

When we grabbed our first chicken, then they knew.  “It is the chickens they are after.”  Then all heck broke loose.  All the animals were running about, back and forth, this way and that.   I just had to remind myself, this is farming.  This is what it is. 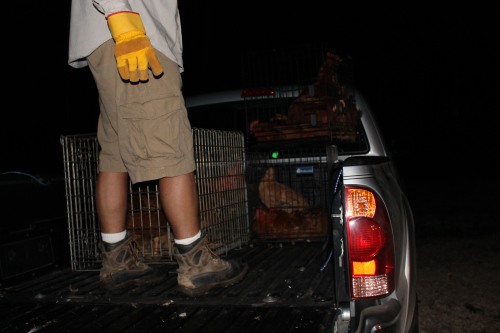 Loadin’ up the truck

Off to the Amish farm we go.  It took about two hours to get there.  Pops and I drove separately because we cant figure out how not to.  It would be too complicated. What if,  heaven forbid, one of us wanted to go somewhere different than the other while we wait for the birds to get their haircut and other stuff.   So, we followed each other there. 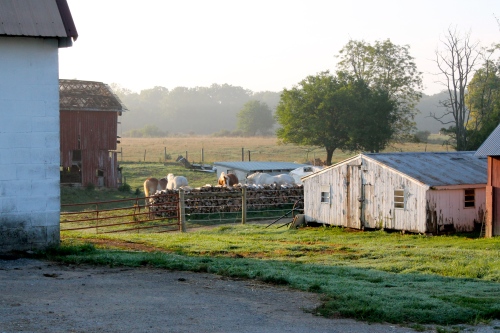 The farm was lovely.  I don’t know what it is about farms, nature, animals. But when you  put all that together I feel like I am going to burst with joy.   I was so taken with this farm.

They were unloading chickens from two other vehicles.  One guy brought 275 chickens and the other brought about 20.  All I could think about was what if they gave me their chickens back instead of mine.  Their chickens we dirty and skinny.  Ours were the “suburban” looking chickens.  Clean, plump, shiny and new.  Beautiful color.  “I don’t want their chickens,”  I said to the kind Amish man.  He said, “You’re not getting their chickens.”  I said “ok”. 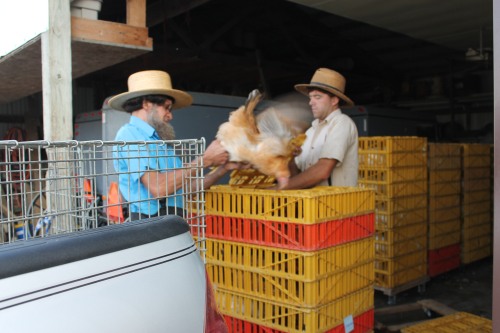 We got our chickens back.  26 of them.  Weighing in at 4-5 lbs to 7 lbs.  Some of them are monsters.  We got them home and I am starting to feel a little queasy about eating these things.  The day was extremely emotional for me.  By the time I got home late in the afternoon I was physically ill.  It was like the day the goat died at my hand.  This farming thing is really emotional.  I know I will get use to it as time goes by but this was the first time I have ever eaten an animal that I have raised. 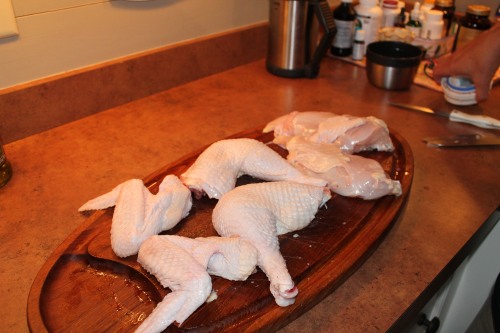 Pops kept making me take photos of the chicken.  I have decided I don’t like taking pictures of food.  Seems really odd to me.   I will take them, but it makes me feel the same as when someone makes me pose for a photo.  It is unnatural.    I am weird.  But aren’t we all?

We grilled the birds and ate them.  OKAY.   So what did they taste like?  The white meat was perfect.  The dark meat was a little chewy.  Not tough.  Just chewy a little bit.   We attribute that to free ranging.  Running around here gaining muscle on their little bones as opposed to force-fed birds in confinement.  The flavor is outstanding.  And we are happy about it.  It was and has been an adventure.  It would be really cool to find someone closer to process them and I think we probably could do it ourselves but that discussion is for another day.  We will enjoy for now. 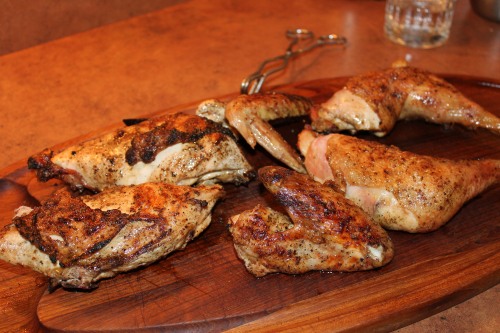